Neptune is the fourth largest and the farthest planet of the Solar System with the most powerful wind speeds out of all the planets. Winds blow clouds of frozen methane across the planet at speeds of more than 1,200 mph in a direction opposite to the planet’s rotation and faster than the speed of sound on Earth. Needless to say, as a teenager with my first telescope, when I learned that there were storms on Neptune I wanted to see them. So I began doing my own research to find out the best way to observe Neptune.

How to see Neptune through a telescope?

Neptune is not visible to the naked eye but it can be observed using a telescope with a long focal length and an aperture of at least 8 inches or more. Using a magnification of at least 200x, Neptune can be seen as a bluish disc among a large number of stars in the background.

Although Neptune is only slightly smaller than Uranus, it’s twice as dimmer. High-powered binoculars won’t do the job, you’ll definitely need a good telescope and some knowledge to properly find and observe this far-off blue gas giant. In this article, we will discuss all of that and more.

Can You See Neptune Through A Telescope

Neptune is known as the second blue planet after Earth, the eighth planet from the Sun, and the fourth-largest planet in our Solar System. Neptune is now the most distant outermost planet following Pluto’s reclassification as a dwarf planet.

Neptune is more than 2.8 billion miles away from the Earth and has a brightness of magnitude 7.6 to 8.0.

It’s completely out of the question that Neptune can be observed with unaided eyes. Our eyes even under perfect conditions, can only see objects as faint as magnitude 6.5.

Because of its considerable distance from Earth and its low brightness, you will need a large telescope with a long focal length to see Neptune in the sky.

Neptune is only visible in the early evening at the start of the year. It sinks below the horizon by nine o’clock at night, thus the best time to see it in January is shortly after sunset.

From February, Neptune will begin moving closer to the Sun and you won’t be able to see it in the night sky till the month of May.

The blue giant will be visible again at the beginning of June. You can observe it in the dark sky just before dawn. If you’re an early riser then this would be the perfect opportunity to get a glimpse of Neptune through your telescope. During the months of July and August, Neptune will gradually become visible earlier.

You can expect it to stay visible throughout the night in the months of August and September.

In the later part of the year 2021, Neptune will become an evening planet and it will be only visible after dusk gives way to night’s darkness and it will set around midnight at the beginning of November.

How To Find Neptune In The Night Sky?

Neptune is so far away from the Sun that it rotates on its axis once every 16 hours and orbits the Sun once every 165 years. This means that Neptune hardly changes its position and it can always be found in the same small patch of sky.

Since the planet moves so slowly, you can find Neptune within the Aquarius constellation throughout the year 2021.

Because it moves so slowly, Neptune will spend the entirety of 2021 within the Aquarius constellation. Towards the end of the year, the planet will get very close to Pisces, but it will still remain in relatively the same place.

As the year progresses, Neptune will get very close to Pisces, but it will still remain in almost the same place.

So whenever Aquarius and Pisces are in the night sky, Neptune will be in approximately the same place.

The best way to find the exact location of Neptune on any day or night of the year is to use astronomy phone apps such as SkySafari 6, Stellarium, SkyView Lite, or Night Sky Lite.

All you have to do is open the app on your phone and move your arm across the sky. The app will show you every sky object that’s there in the sky at that time. To find something specific, such as planet Neptune, use the search feature of these apps and you will have all the necessary information about the celestial object on your screen within seconds.

When you look at Neptune through a telescope it appears blue because huge quantities of methane gas in its atmosphere absorb all the red light from the sun and reflect the leftover blue light.

As I said before, the planet Neptune is quite difficult to observe, even with good magnification in a large amateur telescope, Neptune will look like a regular star with a bluish hue. This bluish hue will confirm that you’re looking at the planet and not at any random star.

Once you have found Neptune through your telescope, I highly recommend increasing the magnification. That is when Neptune will come into focus as a tiny blue disc rather than a pinprick of light, like a star.

There are two major surface features on Neptune called “Great Dark Spot” and the “Bright Smudge”. Both of these are parts of a storm on Neptune’s surface that is the size of the planet Earth.

Although these surface features are as big as our planet Earth, you cannot see them from here even with a large telescope because Neptune is so far away.

Although you won’t be able to get a great view of the surface or the storms of the planet, just being able to see the flat blue disc which lies 2.8 billion miles away is an achievement in itself.

You can see Neptune to an extent with any intermediate telescope. However, there are a few characteristics that make a telescope perfect for observing Neptune.

Although you won’t be able to see any surface features of Neptune, to distinguish it from the surrounding stars you would need a telescope with a magnification power of somewhere between 150x-200x.

With such magnification, the planet Neptune will appear as a flat disc with a blueish hue which is very different from the stars around it. This is the best way to distinguish Neptune from the stars while observing it through a telescope.

Below are a few telescopes that I highly recommend that can help you see Neptune and other exclusive heavenly bodies.

Can You See Neptune’s Moons Through A Telescope

Neptune has 14 moons, the latest discovered in 2013. Each of the moons is named for a mythological Greek water deity. Moving from closest to Neptune to furthest out, their names are Naiad, Thalassa, Despina, Galatea, Larissa, Proteus, Triton, Nereid, Halimede, Sao, Laomedeia, Psamathe, and Neso.

The first moon to be discovered was Triton, which is also the largest one. Although Triton is the largest moon of Neptune, it is also very dim which makes it impossible to be seen without a very powerful telescope meant for scientific research.

Useful Tips To Get The Best View of Neptune

Since Neptune is very far from Earth and very dim in the sky follow these tips to get the best views through your telescope.

Neptune At Opposition In 2021

In 2021, Neptune reaches opposition on September 14 at about 9 UTC. That’s when Earth is flying between the sun and Neptune, placing this outer world 180 degrees from the sun – opposite the sun – in our sky. Opposition marks the middle of the best time of year to observe an outer planet. At opposition, the planet rises in the east as the sun sets in the west and is visible throughout the night.

Neptune’s 2021 opposition takes place in front of the constellation Aquarius the Water Bearer. 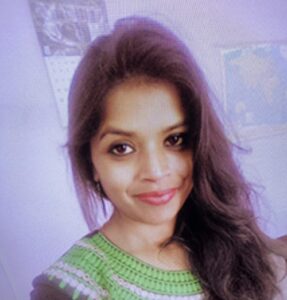 My love affair with space began in a field in India at the age of 7, when I looked up at the Milky Way for the first time. Ever since, I have been attempting to cram in every fact about the Universe, I can find into my head. 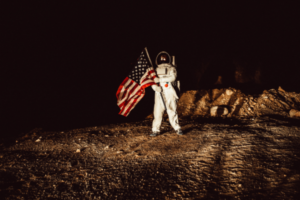 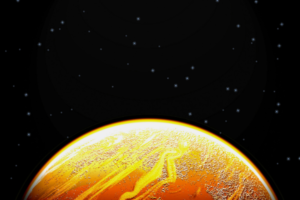 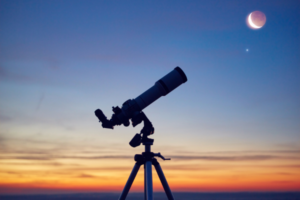 What Is A Reflector Telescope? How Is It Different From Other Telescopes