Dobsonian vs Reflector - Which One Should You Buy?

A couple of decades ago as a beginner when I was researching the telescope market for my first telescope, I too was confused when it came to the differences between different types of telescopes.

I kept hearing Dobsonians and reflectors repeatedly from the people around me, but no one actually explained the difference between the two.

So, what is the difference between a Dobsonian and a reflector?

Well, this is just the basic difference between a Dobsonian and a typical reflector telescope. If as a beginner you’re trying to decide which one will suit you the best then I recommend reading this article till the end to help make your decision process smoother.

Before we dig into the functionings of Dobsonian vs. reflector telescopes … let’s start with the basics.  What exactly are the key features that differentiate Dobsonians from reflectors?

Dobsonian is a relatively new telescope design that was invented by John Dobson in 1965 in San Francisco, California.

Dobsonian telescopes contained a basic mechanical design that could be easily manufactured from available types of machinery to build a massive, mobile, low-cost telescope.

The Dobsonian quickly became popular because of its ease of use and relatively low cost.

Nowadays it has become one of the most common telescopes recommended for beginners or for those wanting a larger reflector for the power, but at a lower price.

The Dobsonian telescope design allows amateurs to get bigger and better mirrors, which aid in seeing items deeper in space.

In fact, many amateurs who are more experienced will often build their own Dobsonian based on their needs and personal specifications.

For most people, purchasing a Dobsonian is the first step to seeing planets, galaxies, and distant stars.

The Dobsonian telescope is basically an inexpensive large-aperture Newtonian reflector on a simple alt-azimuth mount.

Dobsonians are the best when it comes to pure visual deep-space observation. With huge mirrors (up to 36” in diameter) these reflectors are often called “light buckets” because of their immense light-collecting ability.

As long as you are fine with having to manually find and track your telescopic targets yourself, a Dobsonian telescope is without a doubt the best choice for getting started with visual astronomy.

If you’re a beginner looking for a Dob that lets you view the Moon and planets in close-up detail, and has enough light grasp to pull in pleasing views of faint nebulas, galaxies, and star clusters, then here are my top recommendations for some amazing Dobsonians.

How does the light travel in a Dobsonian vs a Reflector telescope? 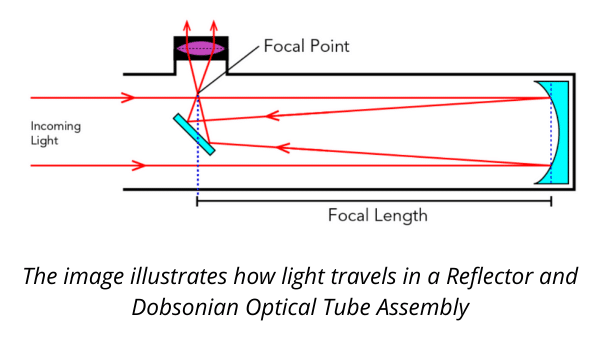 The Dobsonian telescope follows the Newtonian design that uses a primary concave mirror and a secondary flat diagonal mirror.

The lower part of the telescope is fixed with a parabolic or spherical primary mirror that is used for capturing the light rays from different celestial bodies.

When the telescope is pointed at a celestial object, it collects light rays from that object through the aperture or the open end of the telescope

This light travels inside the telescope’s optical tube assembly and hits the parabolic mirror placed at the end of the tube.

Mount: Main Difference Between a Dobsonian & a Reflector

A Dobsonian and a regular reflector telescope can only be differentiated by the type of mount they sit on.

A reflector telescope generally uses an equatorial mount, on the other hand, a Dobsonian almost always uses an Alt-az or Altazimuth mount.

The Alt-az mounts of Dobsonian telescopes are usually made from wood or metal with bearings and are easy to spot as they sit low to the ground, and feature a wide base at the bottom.

If you want to point an Alt-az mount to a celestial object, you adjust the controls to rotate and raise the scope in the same way you would if you were turning your head to look at something.

Lately, some telescope manufacturers such as Sky-Watcher & Orion have put GoTo systems with motors on some Dobsonian mounts.

With the advent of computerized, motorized ‘Go-To’ systems, Alt-az mounts have become more sophisticated. Some now support Go-To and can track targets in the night sky once an alignment process has been completed.

The advantages of Dobsonian manual alt-az mounts are that they are very cheap and simple to make and are exceptionally stable.

The disadvantages are that they are relatively heavy and awkward to transport and aren’t really suitable for tracking the motion of objects.

Also, this nature of Alt-az mounts makes Dobsonians unsuitable for long-exposure astrophotography. For that, you will need an equatorial mount, which can track the stars equatorially.

Equatorial mounts, also called EQ mounts, are more complex and expensive than alt-azimuth mounts. In addition to declination and right ascension axes of motion, a telescope on an equatorial mount can track objects across the sky using the mount’s polar axis.

To do so, telescopes on equatorial mounts must be aligned properly before use – called polar alignment.

An equatorial telescope mount (often called a German equatorial mount, or “GEM”) that has been accurately polar aligned with the polar axis of the Earth can follow a particular object in the night sky for an extended period of time.

This can be achieved either by manually adjusting the controls or, more commonly, with a small electric motor.

Both Alt-Az and Equatorial mount designs are extremely popular, and allow the user to freely point the telescope in two perpendicular directions (called axes).

The alt-azimuth mount design simply allows you to move the telescope in altitude (up and down), and azimuth (left to right).

An Alt-Az mount is great for casually observing objects in the night sky, but is not suitable for deep sky astrophotography.

The Alt-Az mount was designed for convenience and practicality, at the cost of precision tracking over long periods of time.

On the other hand, the German equatorial mount design has a right ascension (RA)  axis, a declination axis (DEC), and a polar axis (the RA axis aligned with the celestial pole).

When an equatorial telescope mount is parallel to the Earth’s rotational axis, the sky’s apparent motion from east to west can be followed (tracked) accurately.

The RA motor in an equatorial mount slowly moves in one motion to match this speed of motion for accurate long-exposure astrophotography.

A curved primary mirror is used to gather the image to be seen. It’s angled to reflect against the secondary mirror.

The eyepiece is directed at the secondary mirror where it’ll magnify and enhance the image for your viewing.

Reflector telescopes have many sub-types which differ from each other in the number of mirrors, the shape of mirrors, and other details.

But the one thing they all have in common is that they utilize a large primary mirror as the aperture of the telescope.

If you’re a beginner looking for a compact and lightweight reflector that provides great views of the plains on the Moon, planets, bright nebulas, and galaxies, then here are my recommendations.

Is Dobsonian better than reflector?

Dobsonians were made specifically by and for amateur astronomers, and even now decades after they were first made, they’re a highly recommended option if you’re looking for a new telescope and you’ve never owned one before.

Dobsonians have a simple design of a tube, a set of optics, and a basic mount and it’s this design that makes them cheaper than reflector telescopes.

Also, the Dobsonians don’t even need polar alignment and the Dobsonian’s alt-az mounts have a solid stable construction as well as a simple design. You can use it without concern of the mount breaking down because of wear and tear over time.

A Dobsonian telescope can last a very long time because of its sturdy construction and robust design.

Is a Dobsonian telescope a reflector?

Yes, technically a Dobsonian is a type of reflector telescope. Both use the same Optical Tube Assemble where light enters the tube, reflects off of the primary mirror at the base, and is then focused onto the smaller flat secondary mirror and then finally, into an eyepiece.

Dobsonian and reflector telescopes have a big advantage over telescopes with lenses such as refractors and Cassegrain telescopes, as mirrors are a lot cheaper to make than lenses. Plus they can be a lot bigger.

I hope this article helped in clarifying the major differences between Dobsonian and a reflector telescope.

Although both share the same optical tube assembly, the major difference between Dobsonian vs Reflector is in their mounts. A Dob uses an Alt-az mount whereas a Newtonian reflector uses an equatorial mount.

If you’re a beginner looking for a good budget telescope then I would highly recommend going for a Dobsonian, as a Dobsonian can give the most bang for your buck.

This simply means that you can get a telescope with a much larger aperture for a much lesser price when compared to any other telescope type of the same size.

As a beginner, when you’re new to astronomy, you can be bombarded with jargon and it can be difficult to identify what kind of telescope you need.

But if you’re a beginner, then you can never go wrong by choosing a good Dobsonian for yourself.

Here’s my pick for the top Dobsonians you can buy if you’re a beginner. 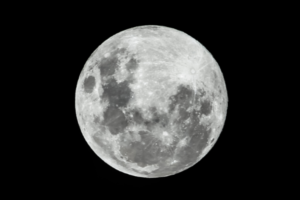 How To See The Moon With A Telescope 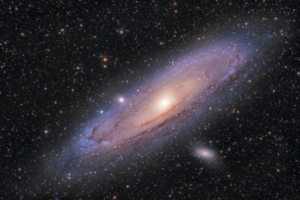 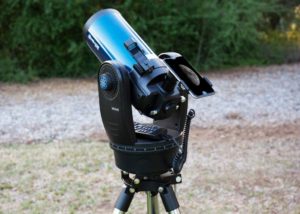 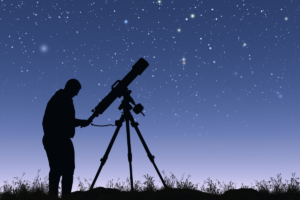 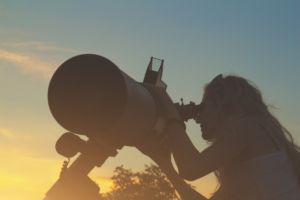 Best Telescope For The Money 2021; Reviews